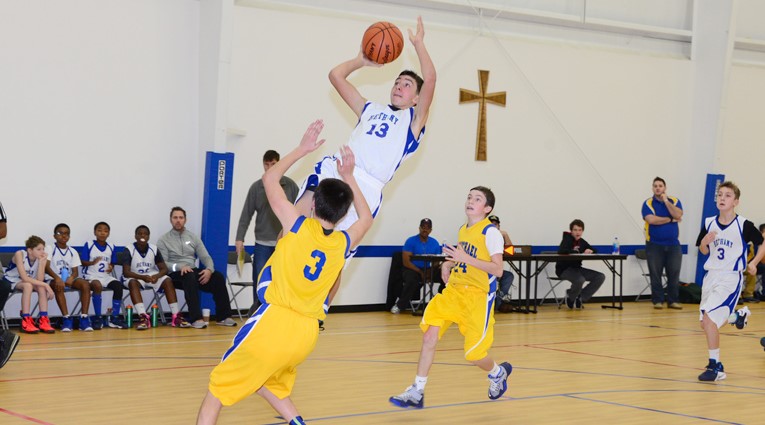 Welcome to our new GCCYS Boys Basketball page. Whether you have a son playing in our league or you are a coach or coordinator looking for information about our largest youth athletics ministry with almost 350 teams, we hope that you find the information provided on this page useful.  Scroll down to find information about the current season as well as metrics from last season.

Rob is the boys coordinator at St. Columban and has been the boys basketball commissioner for the GCCYS since its inaugural season in 2015.

To participate in the GCCYS, we expect all parents, players, coaches, and referees to abide by the rules and behave in a manner becoming to our Catholic faith.  Please take time to read the Rules document as well as our Sportsmanship document and Ten Things Parents of Athletes Should Know.

In order for your child to participate in the GCCYS, ALL parents/guardians must fill out a Liability Waiver form for each of their children playing in our league once per school year.  We try to help out our coordinators by matching up waivers with roster entries so please double check the spelling of your child's last name, verify date of birth, and make sure you choose the correct organization.  Parents may begin filling out Liability Waivers for the 2022-23 school year on June 1st.

When are games played?

The boys basketball season typically takes place the first three weekends in December, followed by a two week break for Christmas, followed by the last five weeks of the regular season. Games are played primarily on Saturdays and Sundays when an occasional game on Friday evening and in rare cases, Thursday evening. The boys tournament will take place over the course of two weekends with the 3rd-4th grade tournament taking place the first weekend and 5th-8th grade the following weekend.

Are your referees 'certified'?

Yes, all of our referees are OHSAA certified. When the GCCYS was formed for the 2015-2016 season, the roster of referees was upgrade to only include certified referees to provide a better game experience for everyone involved.

Are awards given to division or tournament winners?

Team trophies are given to 1st and 2nd place finishers in our post-season tournament. T-shirts are available for purchase for regular season and tournament champions.

What is a Liability Waiver and why do I need to sign one?

A Liability Waiver is an on-line form must be filled out by a parent or guardian for each player that wishes to participate in our league one time per school year. The purpose of the waiver is to release the league of any liability in the case of an accident or improper conduct by players, coaches, or fans.

Do I need to pay a gate fee to attend league games?

Each parish/school may choose to charge admission for regular season and post-season tournament games. Some choose not to charge or charge less than the league max which is $5/family, $3/adult, and $1/child.

Please read the timeline for the upcoming 2022-23 boys basketball season!

For the 2022-23 season, the current thought is that the tournament for all grades will take place from February 8th-12th since the girls season is ending earlier for 2022-23. This will be finalized at our next league meeting.

The Sunday of tournament weekend is reserved for championship games only. We will work around parish conflicts as best as we can but there is very limited time available for this tournament to be played. All teams participate in the tournament unless they notify the league by January 15th. In order to seed teams with as much regular season data as possible, the schedule for the tournament will be released on the Monday of tournament week. A team trophy is given to the 1st and 2nd place team in each bracket. Boys championship games for 6th-8th grades are usually played at area high schools such as Moeller, McNicholas, St. Xavier, Purcell-Marian, and Roger Bacon.